In Bed with Homophobes: Thrashing the Left with Their Own Yardstick

As a secular liberal atheist I can't believe that I am about to write an article that is partly in defense of the Democratic Unionist Party, but such is the utter hypocrisy of so many of their critics I feel it is something that needs to be pointed out more often. One of the main criticisms leveled at the Tories, is that the DUP are homophobic because of their fundamentalist Christian views and therefore no decent political party that cherishes equal rights for gay people would be seen in any kind of coalition or do any kind of deal with them in exchange for their support. If political associations with homophobes is the yardstick by which we judge the decency of politicians and political parties, well then a lot of people on the liberal left spectrum are in need of a good thrashing with the very yardstick they are beating the Tories with.

The hypocrisy which I am about to reveal (many of you will have guessed it already) was in abundant display on the comedian Frankie Boyle's TV show, 'New World Order,' on BBC 2 on Friday 29th June. Frankie Boyle referred to "the homophobic DUP" as "fanatics" and the Tories were derided throughout the show for having anything to do with them. In fact, the first half of the show was titled 'the death of hope' because the Tory deal with the DUP was just that to Frankie and his smugly self righteous audience. However, as Frankie and his panel showed us, there was still some hope left and it was in the figure of Labour leader, Jeremy Corbyn, because Comrade Jeremy and all those decent progressive people in the Labour party would never be seen dead associating or making alliances with  homophobic religious fanatics in order to further their political aims now would they?

Jeremy Corbyn was one of the founding members of the Stop the War Coalition, which opposed the American and British led wars in Iraq and Afganistan and he served as the Chair of the organisation between 2011-2015. In a report by the campaign group One Law For All, 'Siding with the Oppressor - The Pro-Islamist Left', co-written by the British-Iranian communist, Maryam Namazie, the STWC, entered in to an alliance with the Muslim Association of Britain in 2002 where they organised marches and protests together. One leading member of the MAB, Anas al Tikriti,  has also served as the vice President of the STWC. Various members of the MAB have views on sexuality, free speech and gender relations that make the DUP look so moderate they might be willing to jettison their fundamentalist Christianity and engage in a bi-sexual orgy with their rivals in Sinn Fein if they would just shut up about the Irish language and stop harping on about a united Ireland.

The MAB are linked to the worldwide Muslim Brotherhood movement who are an extremist organisation. The spiritual leader of the Muslim Brotherhood is the hate preacher Yusuf al-Qaradawi, who was eventually banned from entering the UK and Ireland and who has links to Dublin's Clonskeagh mosque.  However, back in 2003 he was free to enter these islands where the MAB, hosted  him in London and said they were "honoured to host arguably the world's greatest living [Islamic] scholar." The then London Mayor, Ken Livingstone, was very keen on hugging jihadis and physically embraced al-Qaradawi and refused to condemn his record of illiberal hate speech when called upon to do so.

Now, Mr al-Qaradawi's 'scholarly' activities have led him to have a very different view of the world than you would get from a gender studies seminar, or from spending a semester reading Victorian literature, or the works of liberal philosophers like John Stewart Mill. Mr. al-Qaradawi doesn't try and obfuscate his hateful illiberal views; he wears them openly as a badge of honour. He is on record for supporting the killing of ex-Muslims, the killing of gay people, stoning to death for any sex outside marriage, wife beating, female genital mutilation, and has said the Jews deserved the holocaust. One of Jeremy Corbyn's former senior colleagues in STWC, Lindsey German, had this to say about making alliances with the MAB in order to further a common cause:

"Of course some Muslims and non-Muslims hold views on some social issues that are more conservative than those of the socialist and liberal left. But that should not be a barrier to collaboration over common concerns."

The actual truth is that many Muslims hold views on social issues that are even far more conservative than the DUP and its followers. Homosexuality is punishable by death or imprisonment in almost every Muslim majority country and over half of Britain's Muslims believe homosexuality should be illegal.  The DUP for all their many flaws are not calling for homosexuality to be illegal or for gay people to be stoned to death. There is a gay pride parade in Belfast. There isn't one in any middle eastern country apart from Israel.

I'm going to give Frankie Boyle the benefit of the doubt that he didn't know about his idol Corbyn's political associations with Islamists through the STWC coalition, or his referring to Hamas who murder gay people in the Gaza strip as his "friends." The reason I'm doing so is because the whole show appeared to be so badly researched. The second half of the show was titled, "Brexit Will be Christmas for Racists". Sure, some Brexit supporters are racists, but a very many more are not. I can only assume that Frankie Boyle didn't know that his idol Jeremy Corbyn spent his entire career on the anti- EU Bennite far left of the Labour party. As much and all as I disagree with Corbyn on many issues he is not a racist, nor was the late Tony Benn, and their anti-EU stance throughout their careers is further evidence that there are principled reasons one can have for not wanting to be in  the EU that have nothing to do with opposing all immigration or hating foreigners.

However, there is another possibility and that is that Frankie Boyle is aware of Corbyn's and others on the left's associations with homophobic Islamists, but instead of condemning the Labour leader for this and mocking the beliefs of the Islamists he refuses to put his neck on the line, literally, and goes for the much safer option of mocking the ludicrous, but significantly less extreme beliefs of the evangelical Christians in the DUP. The difference being that the DUP's homophobia involves their supporters not wanting to bake wedding cakes for gay couples, whereas supporters of the Muslim Association of Britain think even asking for a gay wedding cake justifies throwing you in jail or throwing rocks at you. The pro Corbyn left in their criticism of the DUP can't have their gay wedding cake and eat it too. 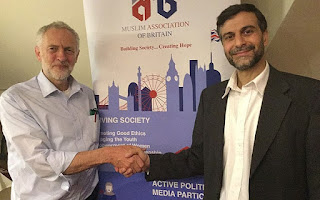