Sex Changes: Why We Shouldn't Alter the Traditional Meaning of Gender

"Gender non-conformity is not in itself a mental disorder. The critical element of gender dysphoria is the presence of  clinically significant distress associated with the condition."

I support trans-sexual people with gender dysphoria who go on to live their lives, as much as is possible, as members of the opposite sex. However, there is something deeply irrational about this proposed legislation as it would allow me, a forty three year old biological male, to wake up tomorrow and head down to the local council and a quick re-edit of my birth certificate and just like that I am now legally a woman. I don't have to alter anything about myself to become a woman, not biologically, not chemically and not sartorially. I don't even have to put on a bit of lipstick or buy a handbag. In reality, I haven't even met the criteria of a lazy transvestite who can't be bothered to throw on a dress, but legally I'm now a member of the opposite sex. If I was a trans-sexual woman who suffered all the distress that comes with gender dysphoria and had put myself through both hormonal therapy and surgery to live as a trans-woman, I would find it insulting to my lived experience that any biological male can just declare himself a female without having to take a single step towards transitioning.

People's fleeting and subjective feelings, as well as a post-modernist disdain for external and biological reality, are not a solid basis on which to enact legislation that determines and redefines the traditional meaning of gender. There is a world of difference between the ongoing distress caused by gender dysphoria and believing because you don't subscribe to the traditional gender roles of either sex that you are somehow neither male nor female. Whereas gender dysphoria has objective characteristics, many non-conforming gender identities are vague, amorphous, entirely subjective and vary according to the inner emotional and mental states of individuals from day to day. Take for instance the non-conforming gender identity, 'genderfluid,' which is defined as:

"A person who is genderfluid prefers to remain flexible about their gender identity rather than committing to a single gender. They may fluctuate between genders or express multiple genders at the same time."

If you think that was non-committal and perplexing you've obviously not heard of neutrois:

"Neutrois is a non-binary gender identity that falls under the gender queer or transgender umbrellas... There is no one definition of neutrois since each person that identifies as such experiences their gender differently."

That's just two of the non-conforming gender identities. There are over sixty. Now, one of the arguments made by those who promulgate the notion that there are a multiplicity of gender identities is that the traditional gender identities, male and female, are social constructs. However, what these people are doing is confusing gender roles and gender expression, which to a degree are socially prescribed, with biological gender. At least, I hope that is what they are doing because if you believe that your reproductive organs were socially constructed by the patriarchy instead of being formed in the womb then you were obviously not listening in biology class at secondary school. The vast majority of non-conforming gender identities have surfaced and proliferated in the past few decades in western societies largely amongst those with a liberal arts University education. This trend occurred at a time when post-modernist theories that promote a cornucopia of gender identities have been in the ascendancy in academia. It is not the traditional definition of gender that is a social construct, but rather the emergence of a multiplicity of gender identities.

Now, I'm not denying that there are lots of people who don't relate to or adhere to the somewhat socially prescribed roles of their biological gender, I don't adhere to everything that is traditionally expected of me as a heterosexual male, but I am still a man. Blaire White, a transsexual woman and popular Youtube commentator, states that most non-conforming gender identities are not in fact trans-gendered. She argues that non-conforming gender identities, such as non-binary, are only found amongst feminists and those on the left, whereas people who experience gender dysphoria and wish to live as the opposite sex can be found across the political spectrum.

At the end of the day people who see themselves as having non-conforming gender identities should have the right to call themselves whatever they want, just without legal recognition, and other people should have the right to say they believe, with the exception of genuine intersex people, that there are only two biological genders. However, I fear that this excuse for a Conservative government may set in motion a process whereby the United Kingdom ends up with a version of Canada's C-16 legislation where people will be legally compelled to use gender neutral pro-nouns. If we allow individuals' subjective feelings to become a basis for legal definitions of identity then people who identify as trans-species or otherkin have as much a right to have their identities acknowledged as a non-binary or genderfluid individual. It is not beyond the realm of possibility that one day you will go to work and Pete from accounts will be dressed in a badger outfit and demanding that his identity as a badger be respected and if you point out that he is in fact a bloke you may well be sacked for a 'hate crime.' Once upon a time, the men in white jackets would have come for Pete, but soon the boys in blue may come for you.

On the other hand, maybe being able to legally change your gender on a whim might be beneficial to those Fathers for Justice who campaign to end the unequal treatment of Fathers in family courts in Britain and Ireland. Soon, you will be able to change your gender from male to female and then you can also identify as your kids' other Mother and perhaps receive equal treatment before the law. It would be great to see a law that is promoted by radical feminists and social justice warriors inadvertently benefiting the heterosexual males these people despise. 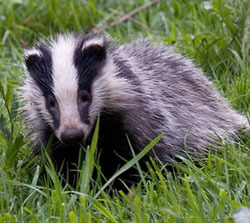