The First Step in Fighting Barbarity is to Speak Out

So, some very well intentioned people had a march in Barcelona the day after the attack on the Ramblas,  it's a city I know well from when I worked there as an English teacher. They wanted to let every one, especially the Jihadis, know they weren't afraid. Well, congratulations, but it's easy not to be afraid when there isn't a van full of religious nutters trying to mow you down. If they had been walking there the day before, when the attack was occurring, they'd have been utterly terrified like any normal human would have been. If they had survived they'd be dealing with horrific injuries and traumatic mental scars. I've seen the disturbing images of dead people including children strewn along the Ramblas that the media will not allow us to see. I can't even imagine the distress that will linger in the memories of the survivors.

Yet, turn on the TV and the media are regurgitating the same old platitudes after each of these ever more frequent massacres of European citizens who come from many ethnic backgrounds. 'Don't be angry.'... 'Love will Conquer Hate'...'We wont let this divide us.' Well, here's  a breaking news story  CNN, BBC and SKY News. The vast majority of Europeans are not racists. We are not about to turn on each other because of some Islamo-fascist terrorist. We have embraced, welcomed and integrated people from all over the world and continue to do so. The majority of immigrants have become loyal and productive citizens of our liberal democracies. However, there is a large number of people in one community, not all, but enough that there are severe problems, who have divided themselves from the rest of us by harbouring racist and both violent and non-violent extremist views.

In Britain alone, according to intelligence services, there are 23,000 people with known Jihadist sympathies. That is 23,000 people who believe the people on the Ramblas had it coming to them and the kids at that concert in Manchester got what they deserved. The government only have the resources to monitor 3,000 of these individuals and so some slip through the net, as we saw in London and Manchester and as we no doubtedly will see again. Yet, the media and certain sections of the left don't want us to talk about this. They want us to share cat photos instead on Facebook and attend narcissistic vigils where we congratulate ourselves for not being afraid of terrorists who aren't there at that precise time and place and because we are focusing on not hating those who kill our children. Just as well we didn't have such a supine mindset when the third reich marched it's way over our continent. Do you think they were handing out cat photos during the blitz when London, Coventry and Belfast were pulverised by Nazi air raids?

Meanwhile, in the last week, one white supremacist knuckle dragger murdered an innocent political rival in the United States and the media and many commentators encourage us to get very angry indeed. What's more, they want us to be alarmed that a tiny amount of American & European neo-Nazis & white nationalists, that the majority of people despise and who carry out horrific, but significantly less attacks than far right Islamists, are somehow comparable to the threat we faced from the third reich or that from militant Islam. To paraphrase the British commentator, Brendan O'Neill​​ , some people only care about fascist movements when they are led by odious white racists like Richard Spencer, but when they are led by brown skinned racists and bigots we are encouraged to focus on the root causes of Islamist violence, which invariably means it's our fault somehow and to not give in to hate and anger. Isn't treating one set of fascists to a different set of standards based on their skin colour and religious beliefs both racist and discriminatory?

Well, I oppose the far right in whatever form they take, be it that of extreme ethnic nationalism or Islamo-fascism. This is not a time for love or virtue signalling hastags on twitter. Innocent people are being murdered on our streets by religious maniacs. It is a time for righteous anger and to defend liberal democracy from all of its enemies, but also to face the fact that in Europe the biggest threat to our societies is from Islamo-fascism.

You can stick your head in the sand and deny it if you want. You can self censor and no platform your own opinions as I used to do for fear of being called a racist. If you fear being called a racist it's a sign you are not. Racists tend to not care about being called racists. They openly march in the streets as we saw in Charlottesville last weekend or form political parties like the irrelevant BNP in Britain. Alternatively, you can speak out by not capitulating to the politically correct mantras that says you shouldn't be angry about Islamo-fascism. You can take a stand with brave women like ex-Muslim, Ayaan Hirsi Ali  and the liberal Muslim Sara Khan and say militant Islam must be stamped out. As the late  Christopher Hitchens said, you can surrender if you want to, but dont do it in my name. The first step in fighting back is not to remain silent in the face of barbarity. 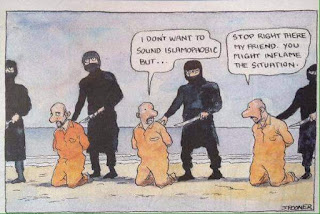