(This article also appeared here in the Conservative Woman)

One of Ireland's leading universities is re-designating all of its bathrooms as gender-neutral.  I am so happy that I can now go somewhere in Dublin and fulfill my life long dream of being able to have a pee in a woman's toilet. I thought the day would never come. It's great to see middle class social justice warriors campaigning on such a pressing social issue. For too long, men and women were contentedly using separate bathrooms unaware that not being able to pee next to each other was a violation of their human rights, even if it is what they wanted.

Well done University College Dublin on righting such a historic wrong. This is your Rosa Parks moment. This is Selma 2018. You will be able to tell your grand children how proud you were the first time you took a pee next to a transvestite in the gender-neutral toilet at UCD. I see Minister Katherine Zappone has tweeted that she's looking forward to the change as it's a 'good day for equality.' Although she didn't seem to care about equality too much when she was hanging out with the Clonskeagh mosque Imam whose mosque preaches death to gays and ex-Muslims and whose spokesperson recently defended female genital mutilation on Irish television.

The next time Minister Zappone meets her buddy Imam Halawa, she might ask him to tone it down with all that death to gays and apostates malarkey over at the mosque, you know in the interests of equality, seeing as she cares so much about it. Perhaps I'm wrong though and it's far more important to focus on the rights of men and women and transgender folk to all be able to poo in the same room together instead of challenging radical Islam and run the risk of being called an 'Islamophobe' on twitter 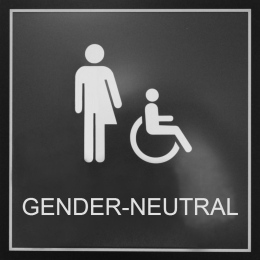