Why does Britain Acquiesce to the Persecution of Ex-Muslims and Islamic Blasphemy Laws?

Most people in the British Isles and the wider western world rarely reflect on the fact that freedom of conscience, thought and religion are enshrined in the legal and constitutional frameworks of our respective nation states. It took hundreds of years to establish these freedoms in Europe. One can be a devout Christian, or convert from one Christian sect to another, or become an irritating new age guru, or abandon religious faith altogether and your right to do so will be respected by most of your fellow citizens. However, certain freedoms are like oxygen, in that you don't really notice them unless they are absent or someone threatens to take them from you. Unfortunately, many British ex-Muslims understand what it is to live with their freedom of conscience either threatened or violated. This is because many people in the Muslim community, not all, have a complete disregard for the concept of freedom of conscience due to passages in both the Koran and Hadiths (sayings of Mohammed) that instruct Muslims to kill those who leave Islam. Thankfully, the Koran often contradicts itself and the genuine moderate Muslims focus on verse 2.256 which states 'let there be no compulsion in religion.' That said, the later passages in the Koran, as well as certain Hadiths that support the killings of apostates are viewed by many Muslims to supersede the earlier more peaceful, tolerant passages in the Koran.

Even the politically correct Guardian, who usually like to lecture people about 'Islamophobia', published an excellent piece in 2015 that highlighted how British ex-Muslims are threatened and then ostracised from their communities with many continuing to live in fear that they will be violently attacked.

Recently, I spoke with ex-Muslim, Nissar Hussain, who took part in a 2008 Channel 4 documentary about the mistreatment of Christian converts from Islam in Britain. Nissar told me about the ordeal he and his family were put through in Bradford simply for exercising their freedom of conscience. Before fleeing Bradford in 2016 under armed police guard, Nissar and his family suffered years of abuse and intimidation from some members of the Muslim community. They had their home attacked on numerous occasions with bricks being put through the windows. One man, whom Nissar knew from a local shop the man worked in told him, "If you were in Pakistan or the middle east I would be the first to chop your head off."

On another occasion, Nissar was hospitalised after a violent attack that left him with a smashed knee cap and broken hand. He may very well have been killed if it wasn't for the intervention of his Polish neighbours. There were also attacks by Muslim youths on the evangelical Christian church that Nissar attended after he became part of the congregation.

"Let me put it bluntly, these bigots have created no go zones in Britain for ex-Muslims. Even if you encountered no violence, you are shunned, maligned and treated with utter contempt and as a second class citizen," Nissar told me.

In another of the many incidents outside his previous home in Bradford, a gang of youths gathered  to shout and threaten him and his family inside. The police arrived and arrested one of the  ringleaders, but he was released without charge. On this occasion a police officer took Nissar aside and told him, 'Why be a martyr? Sell up, move house and go and live somewhere else." Surely, instead of effectively acquiescing to Islam's contempt for apostates the forces of law and order should instead be rigorously defending the freedom of conscience of ex-Muslims that is guaranteed under British law?

This kind of attitude from the police doesn't shock Mohammed Fyaz, who is also an ex-Muslim and a convert to Christianity who has been completely rejected by his family and the Muslim community for leaving Islam. Mohammed told me he knows that there are Islamic extremists actively looking for him and he has to keep looking over his shoulder.

"The state has failed in its obligation to protect our freedom of conscience as laid out in Article 9 of the Human Rights Act. They have failed to train and instruct police officers and local councils to deal with the issue and robustly challenge the penal code of Sharia law which stipulates the death penalty for those who leave Islam."

Whilst there has yet to be a recorded case of murder in the UK motivated by Islamic apostasy laws, it is clear that the well documented persecution and hatred of  British ex-Muslims is driven by that large minority of British Muslims who would prefer if Britain, or at least portions of it were fully governed by Sharia law. It is not surprising that ex-Muslims are persecuted in Britain in that the vast majority of British Muslims are of Pakistani origin or descent and according to Pew Research, 76% of Pakistanis support the death penalty for apostasy, with similarly high degrees of support across most of the Muslim world, where it is the law in thirteen Muslim majority countries.

Whilst there has been some media coverage of the widespread contempt for ex-Muslims in Muslim communities it is minimal. Instead, we are lectured constantly by much of the media and even the police about the perniciousness of Islamophobia in society where any criticism or mockery of Islamic religious beliefs is unjustly conflated with racial bigotry and a hatred of all Muslims. In fact, much of the British media practically enforced Islamic blasphemy laws in their brutal treatment of gymnast Louis Smith for drunkenly mimicking an Islamic prayer in 2016. The London Metropolitan Police also define 'Islamophobia' as not just verbal and physical attacks on individual  innocent Muslims, which of course is wrong, but also in terms of just having a negative opinion about Islam as a religion and a set of ideas.   Last week, the right wing journalist and activist Lauren Southern was banned from the UK merely for distributing satirical leaflets about Islam on her last visit. The extent you agree or disagree with her political views is not the point. The issue is that the state and much of the media are trampling on people's freedom of expression.

Meanwhile, it's perfectly acceptable in Britain to mock and laugh at Christian beliefs and even individual Christians like those in the DUP and Catholics who are opposed to abortion. You can go on any BBC or Channel 4 comedy panel show and mock Christianity to your heart's content. There will be no media witch hunts against you, no twitter storms and no police force issuing statements about 'Christianophobic hate crime' The double standard is shocking and I say this as an agnostic atheist, not as a disgruntled Christian. It's safe, easy and lazy to mock a religion whose adherents will turn the other cheek and say a prayer for you, but it takes real courage to poke fun at a religion when large swathes of its adherents believe cartoons of Mohammed warrant having your head chopped off.

The sad truth for ex-Muslims in Britain is that the police, much of the media and political class are too busy focusing on mean things being said about Islam on the internet and so they don't have much time left to go out in to the real world and robustly challenge obscenely bigoted mindsets that have led to no go zones for ex-Muslims in their own country.


A special appeal: The years of abuse, harassment and intimidation, as well as injuries sustained from being violently attacked, have left Nissar Hussain suffering from post traumatic stress disorder and unable to return to work for the time being. He and his family had to flee their home in Bradford under police guard and were relocated elsewhere where they are struggling financially. Any donations to help Nissar get back on his feet would be greatly appreciated. 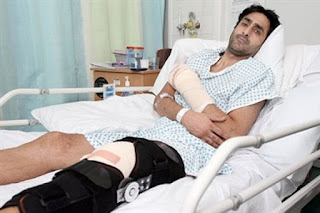