Did you just assume the gender of that gingerbread person?

So, Pret a Manger have had to make a gingerbread lady biscuit because it's apparently sexist for there just to be male ones. Pret a Manger could have pointed out that there is no such thing as male or female biscuits as biscuits are a form of food and don't belong to a dimorphic biological species.

Alternatively, they could have played the ludicrous gender obsessives at their own game by just telling everyone the original gingerbread man biscuit was actually a 'gender fluid' biscuit who identifies as a woman from Friday to Sunday. Although, that might have enraged the pre-op male to female transsexual community who would have demanded a gingerbread trans woman with a todger dangling out from under her gingerbread skirt in the interests of creating a more inclusive society. 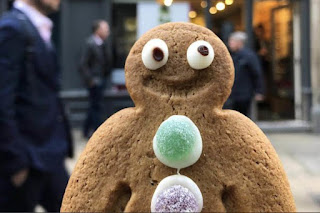