Why is the west giving sanctuary to those who raped and murdered the Yazadis?

What kind of lunacy is it to offer asylum to a Yazadi sex slave, a member of one of the most persecuted people in the world and then to give sanctuary to the ISIS member that abused her? Germany you should be ashamed of yourself.

Any sane and genuinely compassionate immigration policy would allow people like the Yazidi woman, in the article linked above, easy access to to the west. She is one of the many asylum seekers who are grateful to be living in the west and want to integrate because they have escaped from hell at the hands of barbaric Islamists. There are many western citizens like her, from various ethnic and religious or non-religious backgrounds who contribute positively to our societies.

However, when you have a largely unregulated open door, or even a door slightly ajar policy you will see the violent misogynists, such as the one this young woman fled, walk in to the west with ease.

Western governments have implemented immigration policies that have allowed all of this to happen and they've footed the taxpayer with the bill. They've put this young woman's life and of all of us at risk and planted seeds of future social unrest and they walk around with their fingers in the ears shouting racist at anyone who tries to raise the issue. 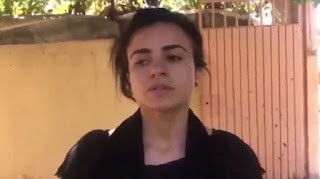