The Virus Times: An admirable act of recklessness

While out for my state sanctioned stroll on Sunday I walked past my local Boots, which in non-pandemic times would be in the busy shopping area of the town. On the other side of the street I saw a solitary elderly man trudging past with a walking stick. With his other hand he was eating what looked like a Magnum ice cream. I watched as he ploughed headlong in to the cold bitter wind, a reminder that winter's sting still lingered. He appeared completely absorbed in the pleasure of eating an ice cream, as if it was the only moment that ever existed. Someone should tell the Buddhists you can reach enlightenment via frozen desserts. He seemed oblivious to the altered social landscape around him. Had he not read of the medical advice for the over seventies to cocoon themselves? Why would such a feeble man take such a risk just to buy dessert?

Now, while I agree that the elderly should quarantine themselves and that this man was somewhat reckless with his well being, I couldn't help but think there might be other factors to consider before passing too harsh a judgment. The fact that such a frail old man was out walking to the shops indicated that he might live alone. If he had any grown up children maybe they lived far away and so there was no one to pick things up for him. Perhaps his daily walk to the service station and a few warm words with the staff while he grabs a newspaper and some confectionery is the only bit of human contact he has since his wife died. He is probably aware that death is something he will most likely face sooner rather than later, with or without contracting Covid-19, and that he has no intention of surrendering his daily pleasures until the grim reaper drags him from this world sucking on a double caramel Magnum.

So, was he reckless and irresponsible? Yes. However, there was also something admirable about this old man refusing to surrender his last morsel of autonomy. Watching him bent over on his walking stick, struggling forward in to the harsh wind as he enjoyed his ice cream reminded me of one of those gnarled and wizened trees you see in a stark landscape that lunges defiantly and indomitably against the elements. Only weeks ago as I rushed about with my busy life I don't think I would have noticed an old man eating an ice cream. Now in the eerie stillness of the Covid-19 era all of life is perceptible. 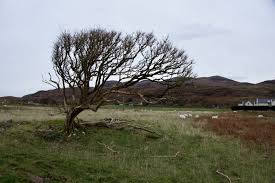