The Virus Times: The bizarre appeal of David Icke explained

The popular conspiracy theorist David Icke is claiming that Covid 19 doesn't exist and that the symptoms are caused by 5G wireless mobile technology in an attempt by globalist elites to exert authoritarian control over the citizens of the world. With over eight hundred and nineteen thousand Youtube subscribers and two hundred and fifty seven thousand followers on Twitter, it is worryingly evident that many people take him seriously. I suspect that Icke himself believes the theories that he promulgates. Of course, it is possible he is knowingly lying, but I think not. His apparent self belief is what makes him even more enchanting to those who are desperate for some unifying theory on how the world functions and our place in it. The passionate convictions and eloquence of any preacher form part of the charisma through which followers are drawn.

However, Icke's charismatic and seemingly deeply held beliefs are only part of his appeal to so many people. This is particularly true with his more recent theories in which he doesn't build on his previous claims that he is the son of God, or that the world's leaders are inter-dimensional shape shifting reptiles. He has probably realised himself that in trying to win over new converts he should probably omit the bits about our lizard over lords until last.

More recently, it is the manner in which Icke weaves many morsels of truth with wild conjecture to arrive at specious conclusions that draws so many otherwise intelligent people to at least give him a hearing. For example, Icke is one of many people, including foreign policy analysts and civil liberty campaigners, who rightly point out that 5G wireless technology can be used by both corporations and states to infringe on personal freedoms by creating a mass surveillance society. This is exactly what is going on in China as we speak. There are also many leading economists, journalists and academics, who as well as Icke, offer legitimate criticisms and raise valid concerns about the long term economic effects of fully locking down society for an extended period of time.

It is by taking these morsels of truth and legitimate criticisms of government policies that Icke gains new converts to his absurd world view. For those of you who fall in to this category, let me put several points to you. Firstly, if the Corona virus was a hoax concocted by a globalist elite, in order for it to be pulled off, it would require large swathes of the medical community from lab assistants, medical researchers, infectious disease specialists, hospital consultants etc. etc to be involved, not too mention a large swathe of other government staff in every country and members of various international bodies. How likely do you think it would be that all of these people who were asked to be complicit in a hoax that covered up the real reasons for purported Corona virus deaths would either agree to it or keep quiet about it? This is so self evident I can't believe I even need to type it out.

Finally, who do you think is more likely to offer credible theories on the origins of the Corona virus? The medical and scientific community, or a man who believes it is a hoax led by inter-dimensional shape shifting lizards, who when in human form comprise the global elite that are determined to usher in a totalitarian global state. If you believe the latter then maybe you've been inhaling too many chemtrails and going heavy on the fluoridated water. 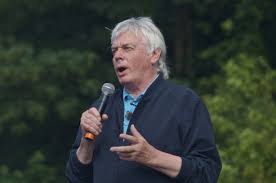