The Virus Times: How I'm staying fit as I binge watch my way through the apocalypse

I've always worried that the collapse of capitalism would involve mass looting and marauding gangs raping and pillaging their way through detritus strewn streets. I never would have expected that it would involve grappling with such dilemmas as, will I re-watch season one of the brilliant Netflix drama Ozark in one sitting, or stretch it out over the week. Honestly, I thought by now I would be swinging my tattooed neighbour around by his nipple piercings in a fight to the death over the last can of beans in one of our cupboards. I was talking to a cousin the other week who told me she was doing a lot of home repair at the moment. She said she expected the apocalypse to be a lot more interesting than walking your dog more and catching up on DIY.

While I'm watching more TV than in normal times, I'm aware of the dangers of turning in to a couch potato and so have increased the amount of exercise I'm doing. This week, I've even taken up teaching myself yoga via YouTube. I've been aware for some years that yoga has a lot of physical health benefits. Unfortunately though, it does attract a fair few guru types with a spiritual superiority complex who tend to be on the woke side of the political spectrum. I know this from having had the misfortune to attend a few hot yoga sessions in Brighton about eleven years ago. Hot yoga, for those of you who don't know, is basically yoga with heated air pumped through the room. It has nothing to do with the sexual allure of the instructor, as I found out when I attended my first class hoping to be acquainted with a Christine Hendricks lookalike in leggings, but instead got a sweaty male instructor with a messiah complex in his late thirties. He was insistent that he was a divine being, he emphasised this a lot, and that we could come to know God through yoga, like he claimed he had. For a divine being he was very clammy and lacked humility. He was none too impressed when I told him I would just be happy with the stretching. Anyway, the YouTube tutor is nothing like that, after his short tutorial I just feel very stretched, in a good way, but I am not sure if I am doing it right because I am not feeling smug like some of those people at that hot yoga class.

Apart from the exercise, yoga, reading and binge watching boxsets, there's not much else to do when you aren't allowed to go two kilometres beyond your house. I'm going to have to be imaginative in finding new ways to pass the time.  I might ring a family member or a friend and bring up some long since buried grievance and see how well it would go down today. I will keep you all posted. 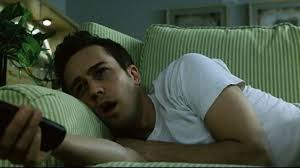